Donor PUBLICITY STUNT???: Well … below are the donor totals through 9/30/2019 from the SC Department of Revenue that we were able to obtain because Jeff Davis (the target of anonymous and defamatory political email attacks) filed a FREEDOM OF INFORMATION ACT lawsuit against the SC Department of Revenue. Probably why these email attacks started up on 9/25/2019, but more on that later.

And the DONATIONS are worse than ANYONE could have expected …. and explains why (not so) Exceptional SC leadership REFUSED to tell school leaders how much had been raised.

But instead of #FireChadConnelly doing something to fix this (if he is even capable … which we doubt) …. Chad was hanging out at the Ritz Carlton in New Orleans this month doing “political” stuff WHEN HE SHOULD BE RAISING FUNDS FOR YOUR CHILD’S SCHOLARSHIP HERE IN SOUTH CAROLINA!!!

And instead of addressing the DATA BREACH …. on Friday (not so) Exceptional SC sent out a CELEBRATORY email promoting a $100,000 donation from C. Dan Adams.

Normally praising donors is a good thing …. and we would not call it out … but C. Dan Adams is no ordinary donor …. and in fact, his organization was a major cause of this DEBACLE!!!!

PLUS … there are some rather NASTY posts about C. Dan Adams online by public interest group(s) about how he takes advantage of low income families.

And ironically … a FAILED SOUTH CAROLINA BANK that cost the FDIC and taxpayers $75 MILLION DOLLARS!!!!  Here is the FDIC report as well … CLICK HERE.

And WORST of all as it applies to this program … C. Dan Adams organization …. Palmetto Promise Institute … was intimately involved in this 2016 GOVERNMENT TAKEOVER of the scholarship program.

REMEMBER … it was C. DAN ADAMS’ PALMETTO PROMISE INSTITUTE that said this GOVERNMENT TAKEOVER would make the program BIGGER. BETTER. FASTER. #MAJORFAIL!!!  Palmetto Promise Institute has removed that failed “Legislative Analysis” from their website … but we have a copy.  Click image below.

REMEMBER, DOR RECOMMEND THIS DEBACLE … RECOMMENDED THE GOVERNMENT TAKEOVER … AND NOW THEY REFUSE TO STEP UP TO FIX IT!!!

We will have MUCH MORE in the coming weeks … stay tuned!!!

Another DATA BREACH at (not so) Exceptional SC

THE BANK STATEMENT:  We were able to get the bank statements this past week via a Freedom of Information Act (FOIA) request.

These bank statements revealed (among other things) that $2.1 MILLION was from one donor.  Had it not been for the generosity of this one donor … it would have been even more disastrous.

Exceptional SC is still living off all the work the “independent non-profits” did and not adding any new value to the situation.

Nothing has changed for the better …

Independent Non-Profits … just like every other state … is the ONLY solution!!! 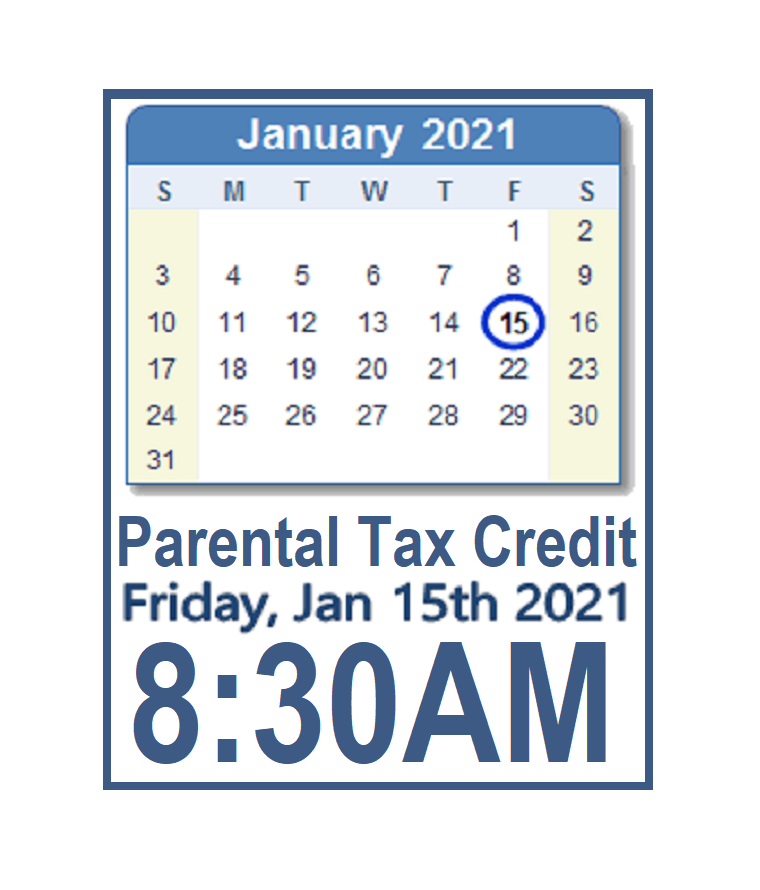 GET READY … and don’t be late.  We expect the entire $2 MILLION to be claimed within minutes!!!

YES … MINUTES … so prepare yourself and type fast.

THE PROCESS: The South Carolina Department of Revenue (SCDOR) will begin accepting applications for the 2020 Parental Refundable Tax Credit on January 15, 2021 at 8:30 a.m. A new tutorial is available to help you with the new submission process. Learn more below.

What you need to know:

What you need to do:

Questions about the 2020 Parental Refundable Credit? Contact the SCDOR at TaxTech@dor.sc.gov.

VIDEO TUTORIAL – HOW TO APPLY: 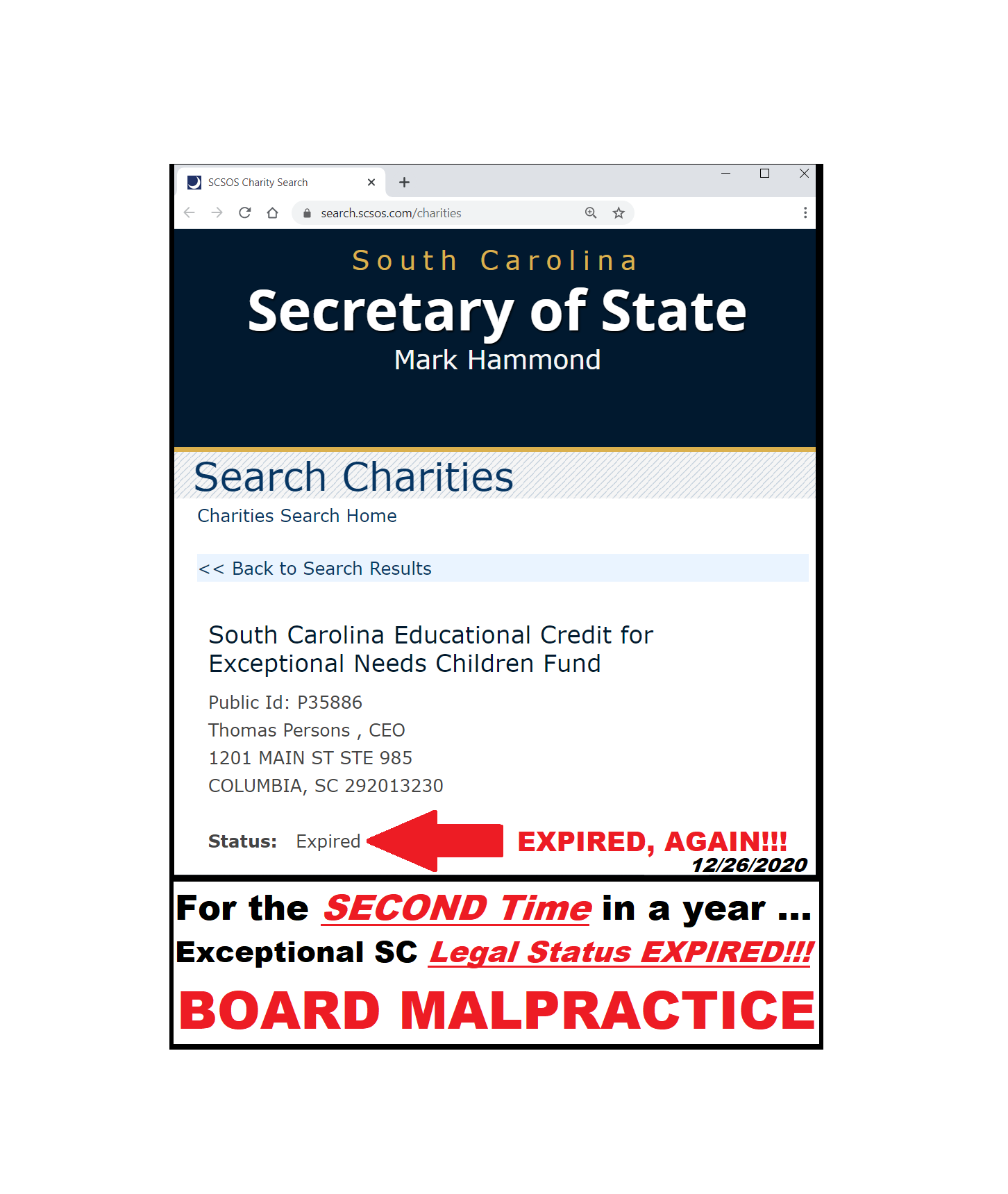 Seriously … can this be happening again???

Granted, I am a tax attorney / CPA … so I think about these things all the time … and one of the VERY FIRST THINGS they teach us “tax people” is BEFORE YOUR CLIENT DONATES TO A NON-PROFIT … check their legal status.  If not all in order, and you let your client donate … it could be LEGAL MALPRACTICE!!!

First you check that the non-profit is actually an IRS approved 501(c)(3) nonprofit … and then you check the Secretary of State’s Office to verify the organization’s legal status is current.

Why, Why, Why???  Remember this from JANUARY 2020 … we mocked the incompetency back then … but no, the #FireTheBoard!!! at (not so) Exceptional SC let their legal status expire AGAIN!!!

This says it all … WE know how to FIX ALL OF THIS … but the (not so) Exceptional SC Board won’t do anything … won’t talk … won’t meet … just blame others.  STOP THE INSANITY!!!!